Parenthood: Simply Put, I love It. 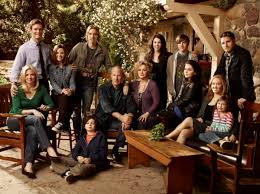 I can't believe I haven't blogged about my current favorite TV show! Perhaps I'm just coming off of a super high from tonight's episode, but regardless, prepare for some gushing.

I am utterly obsessed with NBC's Parenthood. When I first saw the promos last year, I rolled my eyes. All I could think was, "OK, NBC is desperate for some viewers, so they've poured money into a recognizable cast...but this will probably be crap." I absolutely read it as a cheesy show that would be all about the warm fuzzies of family and generally aimed at a demographic older than me.

I couldn't have been more wrong. In every aspect I could possibly ask, Parenthood has exceeded my expectations. They have portrayed an incredible amount of feminism in the relationships. It's rare that the decisions/challenges/family structures depicted in a show feel this realistic to me, but damn, this show does not disappoint.

The cast is made up by Zeek and Camille Braverman (Craig T. Nelson and Bonnie Bedelia) who have four adult children, each with a family of their own. And each of these families is very different. You have Sarah (Lauren Graham) raising her kids on her own, Crosby (Dax Shepard) who has a biracial son and is co-parenting with Jasmine (Joy Bryant), Adam (Peter Krause) with the traditional nuclear family (and his son has Aspberger's syndrome), and finally Julia (Erika Christensen) who is the breadwinner of her family married to a sensitive stay at home dad of their young daughter.

As I'm sure you can see, this show depicts family in a much more realistic and nuanced way than your typical television program. The realism doesn't end there. Time after time, I find myself so fully invested in the story line because the writers craft situations which are both compelling and believable. And time after time, I find myself relating to the characters and empathizing with their thoughts and reactions.

As I have tweeted before, I wanna be a Braverman so freaking baaaaadddd...

All in all, I think it's highly unusual to find a television show which so truthfully depicts both heart felt family values, strong female characters, and feminist ideals. For example (spoilers) this episode it is revelaed that Haddie (Sarah Ramos) is having sex with her boyfriend, Alex (Michael B. Jordan). Even though Adam and his wife Kristina (Monica Potter) represent the most conservative and traditional arm of the Braverman family, and they are disappointed with Haddie's choice, they don't shame her, ground her, or put a chastity belt on her. Instead, they make sure she is being responsible.

Of course, the preview for next episode alludes to her getting pregnant, which I hope isn't true! And I guess we'll just have to see how that plays out.

Truth be told, I could continue to write paragraphs and paragraphs about each of the female characters and how I am impressed with the depiction of each of them, despite their many differences, but I think I'll just let you investigate it for yourself.

Although, I am waiting for a gay character...

Seriously though, if you're not watching, you're missing out on some great TV.