What Will My Daughter Wear Someday?

I've been in a bit of a blogging funk lately. Not that I haven't had tons of fodder for a feminist blogger--people throwing around rape apologism in my life, the US ranking the lowest amongst the industrialized world for mothers, and South Dakota trying their damnedest to outlaw abortion, for example.

But I'm going to gloss over that and instead talk about this, which I found on Jezebel.

Some young girls' clothing available online is sexy or sexualizing and U.S. researchers say this contributes to socializing girls as sexually objectified woman.

Samantha Goodin...examined the frequency and nature of sexualizing clothing available for young girls -- children, not adolescents -- on the Web sites of 15 popular U.S. stores.

If you are surprised by these findings you either haven't shopped for tween clothing or worked with the tween demographic. It's truly appalling how clothing aimed at girl as young as toddlers has become "sexy." Now far be it from me to say that an adult woman shouldn't be able to wear whatever the hell she wants. But when 10 year olds are wanting mini skirts and an 8 year old has a low cut top, something has gone awry. It's particularly scary when you consider the fact that our society blames victims of sexual assault based upon what they were wearing. But there's also some pretty strict gender policing in place too, so if you're a little girl, you're pretty much damned if you do, damned if you don't.

I can't lie and pretend that I wasn't bombarded with sexualized images at a young age, but truthfully the grunge influences of the 90's yielded much more baggy and generally covering clothing than now. My favorite TV characters looked more like this: 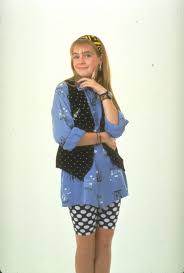 The differences are subtle, but do make an impact. The makeup, the cut of the jeans, the heels and even the pose all suggest a maturity that 7-10 year old Ami didn't watch or try to emulate.

It all leaves me wondering what my hypothetical-future daughter will wear someday. What will her options be? Perhaps we will enter an era of throwback and girls' clothing will return to looking like little kid clothes. Or perhaps the androgynous hipsters will take over the fashion industry?

I don't know but either way I hope something changes before this becomes a reality.
Posted by A. Lynn at 9:28 AM