Is a Bad Photo Sexism? 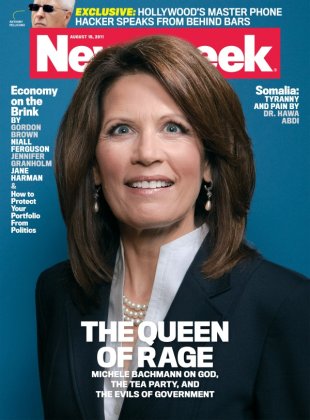 As usual, conservatives only pay any attention to an "-ism" when it affects one of their own.

This time, the controversy is over a Newsweek cover of Michele Bachmann. According to the Yahoo News' account of the situation (did my credibility just go down?), conservative pundits and readers are up at arms about the photo.

"Newsweek needs to be ashamed for propagating one of the typical female stereotypes used to denigrate women," a commenter on Newsweek.com wrote. "If you don't like Bachmann's positions, say so. But to slot her in the typical witch, bitch, nut, or slut memes hurts all women!"

So what do you think? Take a look at the photo. Is this sexism?

I'm not convinced. I'll agree that it is an unflattering photo, but I think that Sarah Palin's Newsweek cover was much more sexist. She was shown in running shorts from a photo she took for Runner's World, an exercise publication. This picture of Bachmann just seems crappy, if anything. Is that inherently sexist? I mean, how often do we see media of both persuasions using really unflattering pictures of the politicians they don't admire. It's a totally standard media trick. It's not really sexist if we can answer the question, "Would this also happen to a male politician" with a resounding: yes.

If anything about the cover is sexist, it might be the copy which calls her rageful. I can't help but think that male politicians who are just as passionate are called just that--passionate, not rageful. But far be it from me to condone her views, which are dangerous, extreme, and hateful. So perhaps, it's not inaccurate to call her the "Queen of Rage" even if it does hint of sexism.

At the end of the day, I have a really hard time objectively receiving conservative's claims that the Left is being sexist (racist, classist, homophobic, what-have-you) since the Right's actual policies seek to limit the freedoms of these people on a daily basis. I'm always feeling that their intention is to use these claims as a smoke and mirrors trick designed to keep the public from noticing what they're really up to.
Posted by A. Lynn at 8:13 PM