Tonight, a few friends and I went to Planned Parenthood's Don't Mess With Texas Women event at the state capital building. God, was it ever powerful to stand there with so many other people who are sick as hell of women's health paying the price for anti-choice extremeist views. 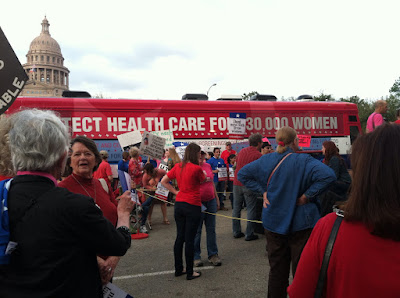 The Planned Parenthood bus (because women shouldn't be thrown under it!) has been traveling the state to protest the fact that 130,000 women will be left without reproductive services and basic health screenings as of TOMORROW.

Amongst the speakers were Planned Parenthood board member and service recipients, Cecile Richards, Allison Catalano (a legislative aide who quit her job because her boss supported the bill), Jehmu Greene, and the AMAZING Dawwna Dukes, who was instrumental in the Women's Health Program which is now in jeopardy.

I simply could not stop getting chills listening to the passion shared by these speakers It was all around incredible, inspiring, infuriating, and heartbreaking--especially the stories about how this will devastatingly effect the poorest people and regions of the state, where healthcare options are already incredibly difficult to come by.

Tomorrow Planned Parenthood representatives are walking a petition with over 95,000 signatures into Governor Perry's office.  If you would like to directly send a message to the man responsible for 130,000 poor Texas women losing their health care, you can do so here.

Don't let it be said that those of us who care about reproductive rights, healthcare, and the poor didn't put up a fight!

Here are some more images from this evening: