This is part of my series on 2012 blockbusters. Check out the others: The Avengers, Prometheus, Snow White and the Huntsman, Ted/Abraham Lincoln Vampire Hunter, Brave, Magic Mike, and MIB3.

I saw the The Hunger Games last night and thoroughly enjoyed it. I'm going to run down a list of things that I really like about the main character, Katniss Everdeen. I feel like a spoiler alert is appropriate, even though the book has been out for years. Although, disclaimer: I've never read it. I'm merely responding to the characterization of Katniss in the movies, which others have said is close to the book.

So without further ado, and in no particular order, here are the 10 things I like about Katniss Everdeen.


1. Katniss is a bad ass who is never un-bad assed. So often female action leads have moments where they fuck up and the males save them. That doesn't really happen to Katniss. Yes, she receives the help of "sponsors" but so do the other competitors in the Hunger Games. There's even a point where her male counter part, Peeta, jokes about taking her bow and she's like "ah hell naw." (Rough paraphrase.)

2. Katniss has important female relationships. Wonder Women! pointed this out to me: Often female action leads are unconnected to other women. They are frequently motherless and have been raised by a lone-wolf father who teaches them their skills (think Hannah in Hannah or Hit Girl in Kick Ass). Even though her mother is portrayed as weak, Katniss has important female realtionships, notably with her sister Prim who she saves from going into the games and fellow tribute Rue, who she works with to survive.

3. Katniss' main goal isn't to fall in love. The story does involve an underlying "love" theme with Peeta--but Katniss is totally using this as a ploy to stay alive. Because the viewers of the Hunger Games like to see a "star crossed lovers" story, she gives them what they want so that she can survive. You see, survival really is her motivation.

4. Katniss is not unnecessarily self-sacrificing. Another good point made in Wonder Women! was that female action stars are often self-sacrificing (Trinity in the Matrix) or die because they cannot handle their own power (Jean Gray/The Phoenix in X3). Katniss can handle her power and made only one sacrifice: she volunteered to go to the Hunger Games to protect her young, small, and inexperienced sister. But make no mistake, she doesn't self-sacrifice just to self-sacrifice. She volunteered because if Prim went she would surely die. If Katniss takes her place, they both have a chance to live.

5. Katniss is smart, strong, and in charge. She's great with a bow. She can hunt, climb, and generally survive in the forest. She figures out things which keep her and Peeta alive and saves him at least three times. She even figures out a way to change the rules of the Hunger Games which allows both of them to survive.

6. Katniss is not perfect. By her own admission, she's not good at getting people to like her. She's a little rough around the edges. But to me, good female characters are ones who are human, and Katniss certainly is. 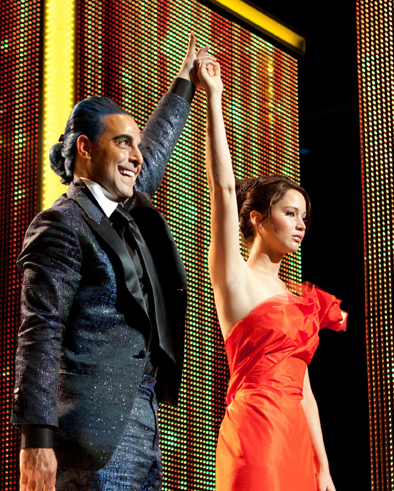 7. Katniss challenges the status quo. As mentioned in point 5, Katniss finds a way to challenge a 74 year tradition of the Hunger Games. The Hunger Games are a way to control the masses, as each year 23 children die. But because there is always 1 winner, the glimmer of hope remains. It's a very effective method of control exercised by the leaders in the capital. But Katniss discovers a way to force them to declare two winners; both Peeta and herself. It's pretty clear that this is not OK with the power structure and is surely the foundation for the two other stories.

8. Katniss stays herself. Part of competing in the Hunger Games is being a likable personality that people can connect with and get behind. As mentioned, Katniss is not good at this. She's visibly uncomfortable with the rituals and TV interviews she participates in. However, she finds a way to get the crowd to rally behind her while retaining her unique personality. She isn't fake.

9. Katniss is likable. Even though Katniss is not supposed to be an overly likable girl in her world, she is, as a character, very likable to us as the audience of the film. We always understand why she is doing what she's doing and it is clear that she acts not only with strength and intelligence but also compassion and humanity. Too often, "bad ass" female characters are cold, detached, and impersonal (ala Lucy Liu in the Kill Bill films.) While Katniss' very rough life would have given her every reason to fall into this trope, she doesn't.

10. And lastly, Katniss is played by Jennifer Lawrence. I really, really like Lawrence. I think she's not only a great actress but also one who chooses interesting female characters (Winter's Bone, X-Men: First Class.) I'm excited to continue to see where this extraordinary young woman's career heads.

So basically, I love Katniss. The book has been recommended to me about 1,672 times, so maybe I'll actually get around to checking it out now.

All in all, I think the film is a great one for teen girls to check out! MUCH better than that Bella chick...
Posted by A. Lynn at 1:32 PM