In a recent conversation with a friend, we connected over how small things about our personal choices have led some liberal acquaintances to lump us in with conservatives/fundamentalist Christians--despite these identities being extremely different from who we really are. (Sorry that's ambiguous, trying to respect privacy.)

It got me thinking. And so, I'd like to throw out a friendly reminder to my fellow progressives: just because you're liberal, doesn't mean you're automatically open minded. To be an accepting, non judgmental person it requires that you actually take the steps to accept people as they are and get comfortable with difference. I see a lot of people who are pretty damn oppressive about their left wingness and quite literally scoff and sneer at people who don't think the way they think or live the way they live.

Now, of course, as feminists (progressives, liberals, what have you) we do not have to accept all opinions equally. As I've written before, I very much agree with the Tumblr STFU Hypocrites when they said "I'm not going to respect your 'opinion' if all it does is oppress people."


But what about the personal choices which some of us make that have literally no bearing on other people? Here are a few examples, to really illustrate what I mean: I've seen women judged as "not feminist" because they embrace attachment parenting for their families. I've seen people labeled "sex negative" simply because they don't personally have multiple sex partners. I've seen gay people called self-loathing just because they prefer not to actively engage in Pride Week activities. I've seen women presumed to be anti-choice because they were teen moms. In each of these cases, the person's individual choice is judged and falsely taken to represent their wider socio-political views. But there's a big difference between saying "all women must stay home with their kids!" and "I chose to stay home with my kids." isn't there? 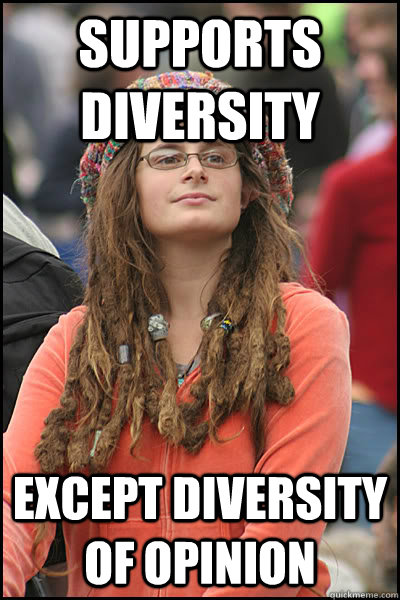 ...exists for a reason, ya know? And let's not let it dominate the perception of those of us on the far left.
Posted by A. Lynn at 4:26 PM