I'm having one of those tough weeks that just happen every so often. It's been hard for me to focus at work. I'm feeling fatigued for no reason. I'm having all kinds of self pitying and loathing thoughts. I'm stressed and bummed out and in a general stank place and I really have no idea why.

Most of all, I've been feeling kind of hopeless about the changing this world. In other words, I'm experiencing compassion fatigue about my feminism.

I know these type of weeks just happen to anyone, but I feel like when you're involved in thinking critically about issues of gender, racism, homophobia, fatphobia, and other oppressions daily, you're doubly likely to feel down in the dumps. I mean...let's just say you're someone who regularly sifts through horribly sexist and often rape apologistic comments from Facebook...just as a hypothetical...not that I'm speaking from personal experience *cough*... It can really build up and become incredibly overwhelming to approach this day after day. It can be hard to believe that calling this stuff out could contribute to a cultural shift. It can be incredibly difficult to face the reality that there will always be far more people making rape jokes, reinforcing gender stereotypes, and harassing women online than you could ever begin to address.

So yes, it's inevitable that rough patches occur. It's normal. You're not weak for feeling overwhelmed. And you're not wrong for taking time to yourself, saying no, and/or asking for help. I think it's important to acknowledge this, especially as women. In the modern context we're supposed to "have it all." (How overused has that phrase become! ) We're supposed to juggle challenging, fulfilling careers with perfect, beautiful home lives. We're supposed to approach challenges with a smile and not "crack" under pressure, because we don't want to look weak. But it's a farce...because what is perfect? Why should we pretend that we can handle things we can't? Why should we put unrealistic pressure on ourselves and adopt unhealthy coping mechanisms?

I'm pretty transparent about when I struggle with stress and burnout...the last thing I would want to perpetuate is some silly illusion that I approach everyday with a smile because that's just not true. And why should it be? It's ok to be vulnerable, because sometimes shit happens. Sometimes you feel out of control. Sometimes your feelings or nerves are a wreck and sometimes it's for a clear reason and sometimes you have no idea why. So yeah, that's where I am right now and it is what it is. I know that I'll feel different in a day or a week or a month. I'm not going to beat myself up about it. It's just about hanging in there until the funk passes. 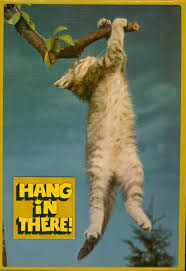 If you've been around here at all, you might notice this is a variation on a theme. So here's some related reading:
-Taking care of myself through stressful times
-Defending selfishness and letting go of obligation
-Stress, supergirls, and writer's block
-Managing activist burnout
Posted by A. Lynn at 6:44 PM

Email ThisBlogThis!Share to TwitterShare to FacebookShare to Pinterest
Labels: stress