Feeding the Trolls: an Anti-Choice Douche 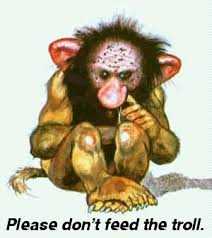 If you know almost anything about feminist blogging, you know that it attracts some of the worst trolls. Even small time virtually unread bloggers like me get them. That's why I've gone to comment moderation. I mean, seriously, I get all of 1 or 2 comments a month, and I had to go to moderation because of haters. How dumb!
On my recent "Choice Matters" post at the other blog I write for, I attracted a troll. (As I knew I would. Trolls love talking about abortion. They love it oh so much.) Here's what "anon" said:

You left wingers LOVE abortion. Jesus christ! Obsessing over it so much. It wont go anywhere, so let people have their opinions. Why should I be okay with a woman being a careless slut and waltzing into an abortion clinic on MY tax dollars. Not going to happen. No friggen way. I would rather be called a "narrowminded asshole Republican", which I have before, than support something that seems SO wrong.

A good policy when dealing with trolls on your blog is to ignore, delete if necessary, and move on. Engaging them them only makes matters worse. More mature bloggers than myself follow this policy. I'm not sure what their comment moderation policies are over at The Progressive Playbook, so I'm not going to remove it or draw much attention to it. On my own blog, I can do what I want. So, I've decided to take this battle to where I feel safe--right here. If any hater comments come through, trust me, they will be deleted, not published, unless in a manner similar than this (to mock and deconstruct them.)
Without further ado, I will now break down why every single thing this person has said is wrong.
Oh trolls--you say so much without saying anything. That's the real problem, isn't it? You don't actually represent any real viewpoints. You just spew myths and venom. If you did respectfully disagree with me and bring some substance, we'd be able to have an actual discussion, free from sexism and hate. I'll just be over here waiting for that to happen. And getting old in the process. And having 30 million abortions, because I just LOVE EM.
Posted by A. Lynn at 11:11 AM