The Problem with Princesses

It's pretty well tread feminist territory to hate on princess culture and Disney Princesses in specific.  It's not hard to figure out how Disney Princesses send little girls (and boys) the wrong messages. For years now, graphics like these two have been making their way around the internet: 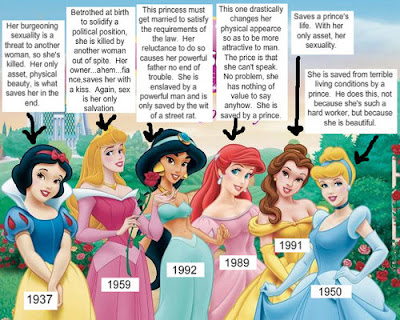 I can admit, I was raised on Disney. And while I might not have intentionally thought about the messages it sent me, I can certainly agree that I wasn't exactly being empowered by them. And taking a look through the text on those images, it's a bit undeniable that princesses aren't exactly teaching our girls to be strong, independent women.
I've been thinking about two other messages princess culture sends girls: stereotypical femininity is best and passivity.
And if you think that girls aren't affected by the princess stuff, I give you an anecdote. I was doing an economic literacy program with 6-8 year olds at the nonprofit I worked for in Indy a few years ago and we were discussing future career goals. One little girl asserted that she wanted to be a princess when she grew up. Sigh. My heart was a little bit broken in that minute and I couldn't help but feel that our society had done this little girl a REAL disservice. She quite literally believed that "princess" was a viable future career aspiration. I tried to work through the implausibility of that with her, but I'm not sure I made much headway. (Fortunately, the rest of the girls chose things a little more realistic.)
I know the inclination now is to say, "Aww, how cute. She just doesn't know what she said" and to chalk it up to her being so little. But the truth is I bet you'd be hard pressed to find a boy her same age who would choose something that illogical as his career goal. He might say something difficult to achieve (like astronaut) but not a career straight out of a fairy tale. Life just isn't teaching boys that their role is to be pretty and married.
Anyway, the princessness of everything really grates on my nerves. I'm sure that this means that someday I am bound to have a daughter who eats and breathes pink, pretty, fluffy, butterfly-y things, much like what happened to strong, independent Julia with her daughter Sydney (in one of my favorite shows, Parenthood) last Halloween. However, much like Sydney, my hypothetical future daughter would have a home life which defied stereotypical gender roles and has outright discussions about gender, which is the environment I wish more kids encountered. In other words, I love this girl's parents:
Posted by A. Lynn at 5:17 PM