Snow White and the Old Hag Who Should Step Aside

This is part of my series on 2012 big budget blockbusters. Check out the others:The Hunger Games, Prometheus, MIB3, Ted/Abraham Lincoln Vampire Hunter, Brave, Magic Mike, and The Avengers. 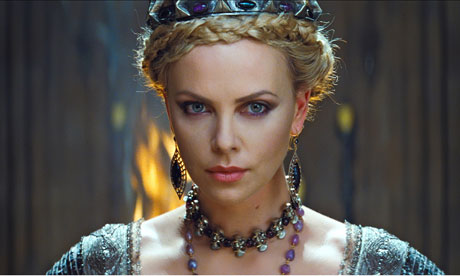 But now that it has simmered in my brain for a few weeks, I figured I'd take a stab at sorting out what exactly went down between the ladies in the film.

Identical to the old fairy tale, the two main women are the evil step mother, Ravenna (Charlize Theron,) and  Snow White herself (Kristen Stewart.) But the film, directed by Rupert Sanders, touts itself as a "twist to the fairy tale" which has a deeper story and a stronger protagonist in Stewart's Snow White.

However, as I started to think about it a bit more, there were other things happening in this reimagining. For example, the Huntsman (Chris Hemsworth) falls into the protector role for Snow White, but when push comes to shove, she saves him and also leads an army of rag-tag rebels against Ravenna to ultimate victory. It's emphasized over and over that Snow White has a strong heart, which she uses to motivate and lead the rebels. And, thankfully, it wasn't your typical Prince Charming to the rescue kind of story. In fact, Snow White didn't really have a love interest in this tale, which is a pretty refreshing take and lends her character more autonomy.

Ravenna is a much more interesting character to me. She is deeply evil and has taken over Snow White's father's kingdom in the most ruthless, cold hearted way. She is a power hungry killer and a horrible leader under whom the land dies and the people suffer. And we are reminded again and again that Snow White is incredibly good beyond question such that it becomes abundantly clear that we should desperately want her to kill and overcome Ravenna.


I can't help but feel that the drastic good/evil dichotomy constructed is an attempt to gloss over the fact that at the heart of the original tale the message is that the aging vain woman should step aside in favor of youth and beauty. But it's an attempt which is complicated by some strange humanizing elements they add to Ravenna's character. For example, we get vague glimpses into her past which was clearly full of hardship and the survival of horrible atrocities. (You start to think that maybe, just maybe, Ravenna's hardened disposition is deserved...?) Add to this the fact that Ravenna is particularly attuned of the importance that her looks and perpetual youth play. Staying young and beautiful is how she derives her power and obtains her self-worth. It's how she takes kingdoms by storm and she will do anything to maintain that position. She even comments at one point that when kings leave their older wives for her, she knows that they would do the same to her if she aged. So of course, despite her incredible evil-ness, it made me feel a bit for Ravenna, as she seemed to be self-aware of the whole effed up age/beauty dynamics going on.


I guess that's what gets me the most. Sanders and the screenwriters have constructed an evil step mother who we're really supposed to despise and she's also the only one who gets that beauty=power for women and that an aging woman is worthless. Yet in the end, it's beauty that undoes her anyway.


I think I'm still a bit confused about the messaging here and the overall portrayal of women. Clearly it is better than the original fairy tale, but one would hope that the passing of hundreds of years could do at least that, right?
Posted by A. Lynn at 11:01 PM