I don't have cable. But I love TV. The result is that random shows are often playing in the background while I write or browse the internet. And NBC comes in the clearest, so that's what is usually on in my house. Yes, like America's Got Talent. Yes, like The Voice. I'm not proud of this, ok! It just happens.

Ronald accuses me of actually watching theses shows, a charge which I vehemently deny, but that's a debate for another day. At any rate, their content seeps into my head, whether it's intentional or not. The past few nights while I've been vegging out, I've caught some of the new show line up. Let's be honest: when a network is behind the slow, sad execution of one of my favorite shows of all time, I tend to get a little bitter about what they bring out next. I mean--if you're putting Community in the death slot, you had sure better be bringing some amazing replacement content.

I can assure you, however, that is not the case. Let me run through my initial reactions to three new shows: Go On, The New Normal, and Guys With Kids.

1) Go On: This is Matthew Perry's second attempt at achieving prime time TV success post Friends, and near as I can tell, it will be just as unsuccessful.

How they describe it: "An irreverent yet charming sportscaster who, after a loss, finds solace from members of his mandatory group therapy sessions."

Overall reactions: Its premise is interesting enough but I've watched two episodes so far and the only thing I can say about it is that I just don't care. It's not invoking a reaction or a connection in me. Perhaps it will be a show that "grows on you" but I just don't see it. To it's credit, I don't have as much to complain about with Go On and I do the two other new shows, but if the best thing I can say is that "it annoys me the least" I'm not sure it's headed for success. Plus, I really feel it's trying to capitalize on one of the best things about Community (the diverse, hilarious ensemble of people who don't make any sense together but end up as a family of sorts) without being "weird" so that it'll appeal to a broader audience--and that bugs me.

Gender situation:  I can't really tell how the gender situation will play out ultimately, but it ain't looking good right now. Three female characters have been at least somewhat developed: the group therapist (Lauren), one of his group members (Sonia), and his assistant (Carrie.)  So far, Lauren is faking qualifications to lead the group and routinely loses control to Matthew Perry's character, Ryan, Sonia is getting over a breakup in stereotype "crazy single lady" fashion and becomes a cat hoarder, and Carrie is giving up time in her personal life to cater to Ryan's needs as he grieves. (That might make her a good person, but it's interesting how he is seeking and demanding that of a female coworker whose livelihood he controls.)

2) The New Normal: I've written about my fears for this show before. They have been confirmed. Jesus, it's awful.

How they describe it:  "A single mother's life as she becomes a surrogate for a gay couple."

Overall reactions: I guess I would refer you back to my statement: Jesus, it's awful. Much like Go On is borrowing from Community, The New Normal is clearly trying to pander to the Modern Family crowd. (I mean...the respective show names even make that clear.) But unlike Modern Family, The New Normal hasn't been able to pull off any hilariously heart warming moments in the two episodes I've seen so far. Furthermore, if you were looking for an -ism, this show contains it. The main problem is the "Nana" character (which I will get into detail about in a moment.) But even if you ignore her, there is a very tokenized black character, a lot of gay steretoyping, and a ton of fatphobia. For example, in just the first 20 minutes of the show, the fertility company references clients who want eggs donors who "are not fatties," the gay couple requests the creation of a "skinny blond child that never cries," and they view the video of a fat woman saying "100 pounds down, 100 to go!" and immediately say NO and pass her by.

WE GET IT. YOU HATE FAT PEOPLE.

Gender situation: So far, there are four female characters. NeNe Leakes' Rocky is so woefully underdeveloped that I don't really know what to say about her. The only female character I really enjoy is the little girl, Shania, who is wise beyond her years, (providing her mom support through difficult times, instead of the other way around) and hilarious (acting our Gray Gardens scenes continuously.) The main woman, Goldie, is portrayed as intentionally quiet, passive, and "sweet"--the show is based upon her taking her life into her own hands and breaking away from her passivity, so I guess that's not the worst thing.

The actual worst thing is Ellen Barkin's Nana character. She's supposed to be an uptight, evil, racist, homophobic, judgmental, controlling asshole that is one of the reasons Goldie is escaping from Ohio to California. But then she somehow ends up in Cali too, and is sticking around as a part of the show. Hoo-freaking-ray. I think the writers are trying to use her as comedic relief--maybe in a effort to be all, "Oh, ha ha! Look at this old, ignorant woman! She still thinks she's relevant. Let's mock her!" but it just comes across as "Hey guys, we totes think that racism is bad, but it's also funny. Aren't we so edgy and cool?" You know, hipster racism/homophobia/etc. 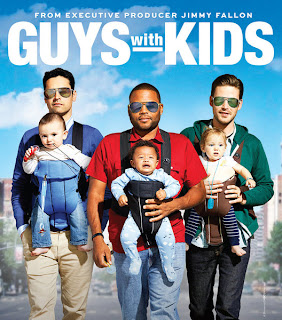 3) Guys With Kids: aka "OMG did you know that men are parents too?!"

How they describe it: "30-something dads struggle as parents because they are still children at heart."

Overall reactions: Of these three shows, this is the only one that I've only seen the pilot and not a second episode, so I don't have a lot to go on. But my reactions to the episode are primarily divided by entertainment vs. messages, stereotypes, etc. As far as entertainment goes: there was almost none. For a "situational comedy" they sure forgot about that critical comedy part. I think I scoff-chuckled once. The jokes were really cheesy and super overdone (think "The Titanic sank, guyz!" jokes). So from that perspective, I didn't like the show at all. I don't think Jimmy Fallon is a comedic genius, but he can make me laugh, so I wonder why his name is on this show if it's going to be so boring.

As for the messages it contains, I'm divided. They admit in their log line above that the show is built on the "dads are just kids too, LOL" stereotype. But it didn't play out as totally that way...

Gender situation: I like that dads are parenting in this show. (And I mean, really parenting--providing primary childcare. Anthony Anderson's character, Gary, is a stay at home dad, for example.) But I think it says a lot about our world that this is the basis for a sitcom instead of just a fact of life.

I don't like how the divorced couple, Chris and Shelia are portrayed at all. Shelia is a stereotypical overprotective, nagging, ex-wife who has to check in on Chris' apartment to make sure it's up to her standards. She's the villain and when Chris eventually stands up to her, another dad comments "you slayed the dragon." Yawn. Eye roll. This stuff is old, guys.

But it wasn't just all gender stereotypes. When another couple, Emily and Nick, are having problems relating because she is a stay-at-home mom and Nick doesn't understand what her days are like, Gary acts as a middle ground and helps Nick understand Emily's experience. When many shows have women who talk to each other and dudes who just scoff together like, "What's their problem? Women! Amirite?" this show is demonstrating that maybe there isn't, or shouldn't be, such a gender divide in parenting. But that said, the show isn't particularly revolutionary in its execution and what little heart it has can't make up for the fact that I simply wasn't entertained. At all.


Well NBC, according to my calculations, that puts your GPA at about a 0.9 for the new fall line up that I've caught. All in all, I recommend skipping all of these shows, because you're not missing much. Here's hoping that they won't kill Community just quite yet so that I can at least enjoy one night of TV. Even if it is a night I'd rather not be at home watching TV.

Email ThisBlogThis!Share to TwitterShare to FacebookShare to Pinterest
Labels: television